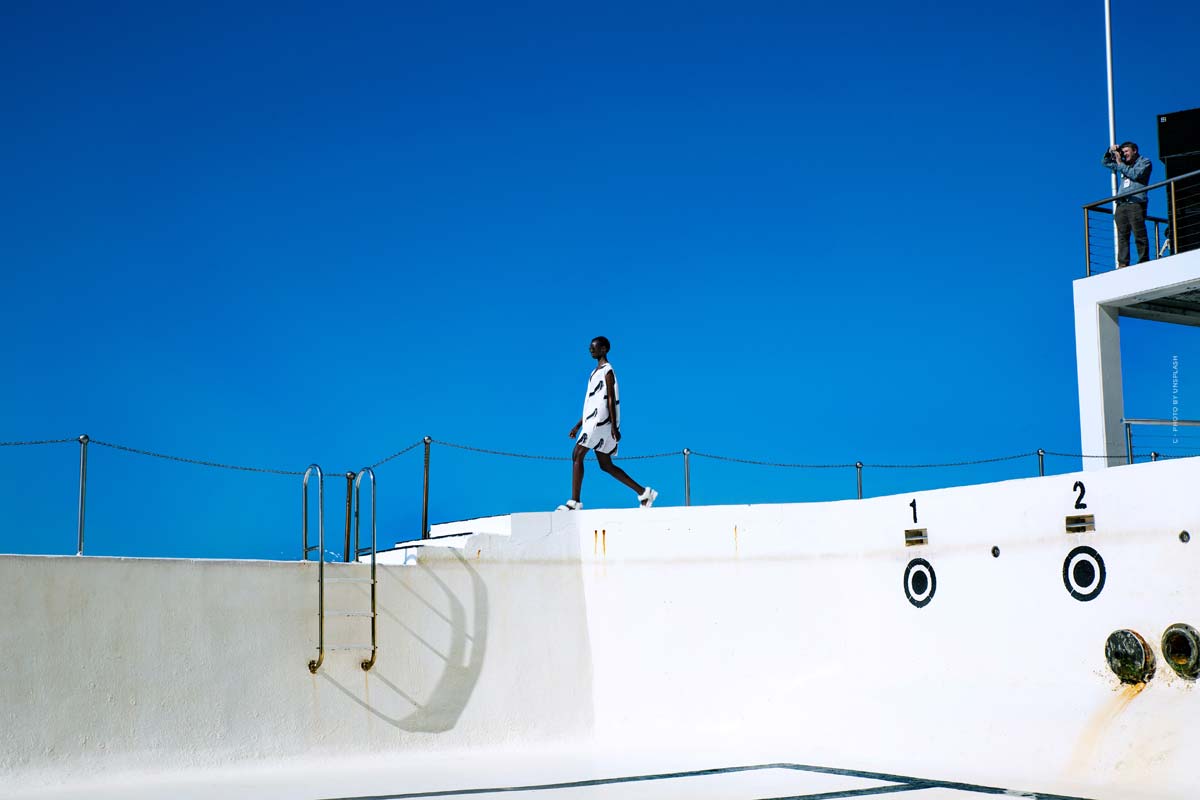 Shudu Gram – The dark-skinned model is truly the epitome of perfection. Even skin, full lips, perfectly symmetrical facial features and a body that others only dream of. The model is literally too perfect to be true. So it was surprising when it came out that this is a digital art project, but the closeness to reality is so amazing that even after a longer look there is hardly a difference to real editorial shots.

Overview hide
Who is Shudu Gram? Facts, Instagram and origin of the virtual model
Digital supermodel with jobs for brands like Balmain, Oscar de la Renta & Co.Balmain: Shudu with Margot and Zhi
Magazine cover: Shudu for CondÃ© Nast & Co.Harpers Baazar: Shudu on the cover
Interview with the creator Cameron-James Wilson

Who is Shudu Gram? Facts, Instagram and origin of the virtual model

Shudu has managed to captivate the fashion world with her stunning looks within a very short span of time. How Shudu came to be and what are the inspirations for the virtual model can be read below.

Well, the question of Shudu’s real existence is basically settled in the headline. In April 2017, the journey of the model created by Cameron-James Wilson began. The photographer had a vision in mind and began teaching himself 3D modeling to turn it into reality. After days and weeks of YouTube tutorials, a lot of practice and a lot of talent, the first image of the CGI model was created.

As a photographer, Wilson had a particularly good eye for detail and was able to create a model that looked amazingly real. Every pore was in place, every part of the face was in the right place. Shudu is the epitome of perfection.

Instagram: @shudu.gram and the beginning of the CGI model era

Shudu Gram stepped into the limelight for the first time, on the profile Shudu gram created especially for her. She posted her first picture there on April 22, 2017. Tagged as 3D art, the finely crafted beauty was well received.

However, the career as a model really took off when the brand Soul Sky wanted to work with the pretty CGI model. A solution was quickly found: The brand’s T-shirt was unceremoniously created by Wilson in as a 3D model and put on the model. The result was breathtaking and the customers were satisfied. Since then, Wilson and the team at The Diigitals have put a lot of time and effort into 3D modeling clothing to fit the bodies of their virtual models and set the scene perfectly.

Booking & Inquiries: The Diigitals, Model Agencies and moreCM Models, an international agency based in Germany, represents Zoe Dvir and Ella Stoller. A step that shows the openness and also the interest of the model and fashion world in digital model avatars.

Balmain proudly presents its ‘Virtual Army’ on its own website and on Instagram. With this, the French fashion house joins the ranks of labels that already rely on virtual models. Many in the industry are already predicting a rapid rise in the representation of virtual models in the advertising industry. Markets like furniture and home decor, as well as food, have been relying on 3D modeling instead of actual mock-up buildings for years. Especially since these environments can be recreated very realistically through CGI.

However, the virtual model’s first big break came earlier. Fenty Beauty noticed the pretty model wearing one of their lipsticks and shared the picture on their Instagram account. The high-contrast, highly aesthetic image was not only popular, it also drew attention. This is because people couldn’t really make sense of the model’s appearance, but few realized that it was a computer animation.

Founded in the seventies, the Ellesse label is also one of Shudu’s clients. The sports and ski fashion brand mainly shaped the fashion of the eighties, but celebrated a comeback in the 2010s. Accordingly, the brand’s image naturally had to be adapted to the new era. Using a CGI model for its campaign is definitely a step in such a direction.

Dominican designer Oscar de la Renta is best known for his eye-catching ball gowns and wedding dresses. The prices of the luxury dresses are often in the range of € 12,000. Between 1993 and 2002, Osca de la Renta was a designer for Balmain, which also used the work of the digital model.

The label’s nature-inspired jewelry was recently showcased by Shudu on her Instagram account. The special thing this time: to show the full effect of the 3D art, the video is animated and shows how Shudu looks in action.

Wearing a dress by Lavie at CK, Shudu is seen on the cover of Harpers Bazaar Arabia. Appearing imposing, the model poses over the camera and cuts a particularly good figure in the mermaid cut dress. The simple gold jewellery completes the look perfectly.

Zipped Magazine has gone straight for two virtual models from ‘The Diigital’ agency on the cover. Shudu and Koffi seduce the camera into their digital world. The newspaper has together with creator of the two, Cameron-James Wilson, and the magazine have geminsam answered the most important questions about Shudu and digital models.

Womens Wear Daily specializes in news from the women’s fashion world. Shudu is definitely one of those news items. Virtual models are one of the biggest transformations the modeling industry has gone through in the last few decades. How much digital models will replace human models, however, is yet to be seen.

What is certain, however, is that slowly but surely the use of these will become more and more prevalent, especially with brands in the lower price segment. The clothing worn by Shudu is also particularly interesting in the shoot. The animation was done by CLO, a digital design agency that specializes in the digital design of extremely realistic clothing. The process of rendering textiles is extremely elaborate and involves an extensive study of the garments, paying attention to all the small parts and details and translating them into the digital realm. The end result then looks like this:

Interview with the creator Cameron-James Wilson

Inspired by a Barbie doll, Cameron-James Wilson created the perfect model. A vision that quickly evolved into something much bigger, his own digital modeling agency. He discussed how much work goes into programming with Zipped Magazine.

Most important questions about digital influencers

Speaking with “Zipped,” Wilson chatted up a few details about the models, his inspirations, and many more topics. The most important points are summarized here for you: